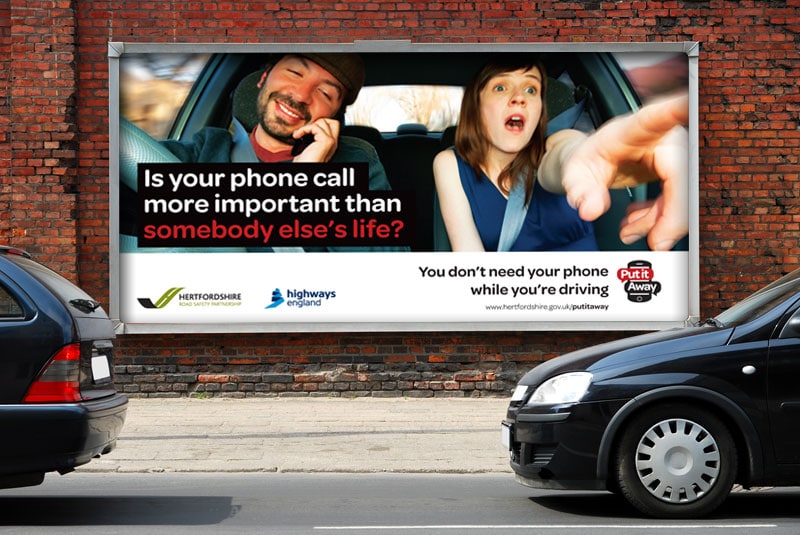 We were approached by Hertfordshire County Council to create a logo and advertising campaign for their new road safety initiative, ‘Put it Away’. The aim of the campaign was to educate drivers about the dangers of using a mobile phone whilst driving.

We created a logo that clearly communicated the campaign’s message using strong bold colours that would stand out and form part of the message on all advertising.

The advertising was to be rolled out across both digital and print media. The Hertfordshire Road Safety Partnership had carried out extensive research into which age groups were most likely to use their mobiles whilst driving.

Different messages were required to target each age range. Facebook was used for the digital part of the campaign – its advertising platform was perfect to target the specific groups.

InSync sourced suitable imagery that would convey the campaign messages for each age range. The Facebook campaign started in early January and runs through to mid February.

In addition to the digital campaign a print campaign was also launched. Unlike the closely targeted Facebook ads, a much broader message was used to appeal to all drivers. We designed the printed adverts to communicate the message through impactful images and simple, clear text – using the logo as the sign off to the message.

The print campaign was rolled out throughout Hertfordshire across posters, billboards, on buses and petrol pumps.

Since its launch, the Put it Away campaign has been short-listed for a local campaign design award which we are very proud to be apart of. www.admedia.co.uk/2017/01/hertfordshire-cc/

If you have an advertising campaign that you would like some creative help with please feel free to contact us either by phone on 0845 468 0982 or by email: hello@insynccreative.co.uk

This website uses cookies to improve your experience while you navigate through the website. Out of these, the cookies that are categorized as necessary are stored on your browser as they are essential for the working of basic functionalities of the website. We also use third-party cookies that help us analyze and understand how you use this website. These cookies will be stored in your browser only with your consent. You also have the option to opt-out of these cookies. But opting out of some of these cookies may affect your browsing experience.
Necessary Always Enabled
Necessary cookies are absolutely essential for the website to function properly. This category only includes cookies that ensures basic functionalities and security features of the website. These cookies do not store any personal information.
Non-necessary
Any cookies that may not be particularly necessary for the website to function and is used specifically to collect user personal data via analytics, ads, other embedded contents are termed as non-necessary cookies. It is mandatory to procure user consent prior to running these cookies on your website.
SAVE & ACCEPT